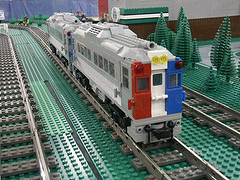 We had a display at the Greenberg’s Train, Toy and Hobby Show at the Dulles EXPO & Conference Center in Chantilly, Virginia. Our layout was the one designed by Kevin Loch for the Manassas show, but we had to make up for the absence of Roy Gal’s structures and vehicles. Our monorail czar was Greg Kramer.

What was I thinking? Kevin might be thinking right about now.

See? A (small) person can get up onto our tables.

The outdoor Metrorail station was assembled from four sections.

We managed to apply the inside skirting on Saturday. 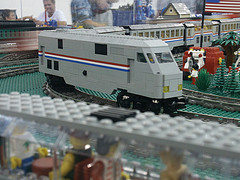 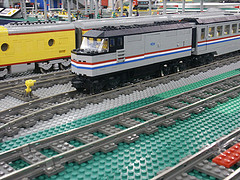 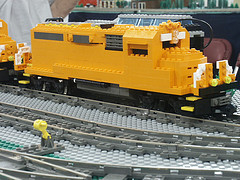 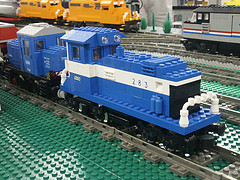 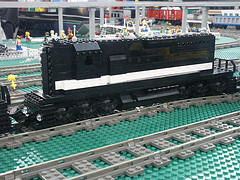 One of Tom’s Southern Railway locomotives.

Bob’s GG-1 and RDC and other trains fill up the yard. 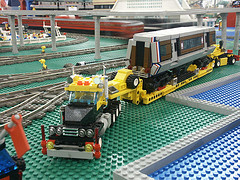 With Kevin, Constantine, and now Nate supplying Metrorail cars, not every one was in use at a time.

Okay, if they’re LEGO® stickers, Tom will apply them to his trailers.

Kids decided the creation on the left was a Star Wars car but did not react to the SPACE! car. 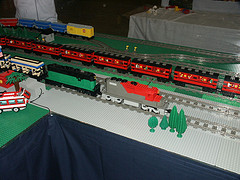 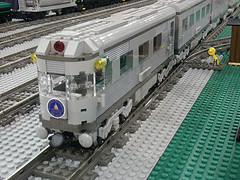 The seal of the WamaLTC remains on the back of Tom’s ATSF observation car. 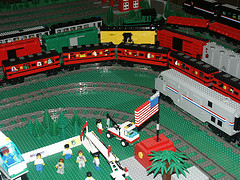 With programming downloaded from DCC for the RCX - Mark’s Bits & Pieces and a whole lot of taped-up track ends, digital command control of properly equipped locomotives was indulged in by several. Because Nate installed a reed switch on the layout to control a crossing gate, we really should revisit our vote at the January meeting.

Some of the programmed RCX bricks. 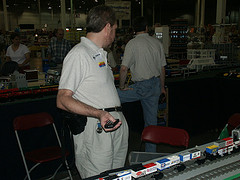 Easily our most discussed feature. Visitors loved it. Greg’s engineering of his cable-stayed bridge proved largely sound even as his footings had to be changed due to the shockingly nonstandard spacing of track from layout edge used by two other participants.

Greg hangs on while he considers some mid-display repairs. 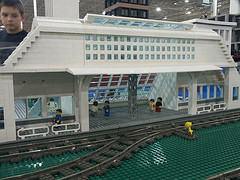 The payoff of rebuilding Margaret’s display to accommodate the monorail track.

Uh-oh, running two monorails on one track has its drawbacks.

Margaret’s display of the history of LEGO® trains returns

Over in a corner of the layout, Margaret completed her playground in distressing proximity to the subway. :-) 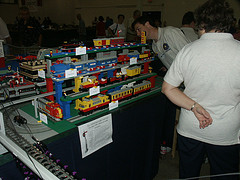 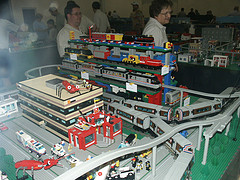 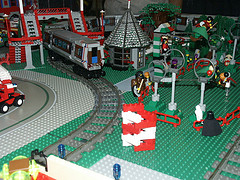 Abe’s insect creations, first seen menacing WAMALUG’s display at the Baltimore Road Show earlier in the month, have lost none of their vigor. 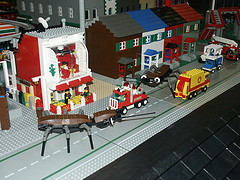 The roof on Constantine’s Pizza Hut is finally completely red. 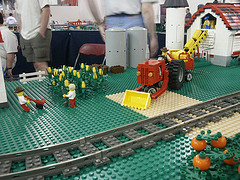 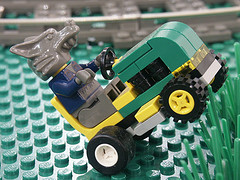 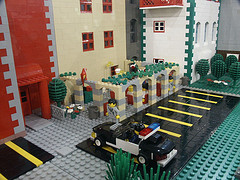 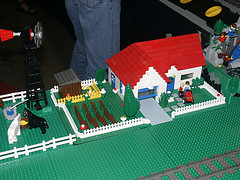 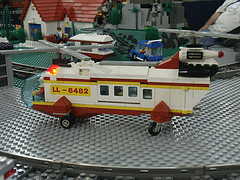 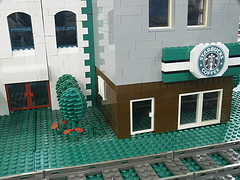 Nate has no trouble with applying a sticker or two. 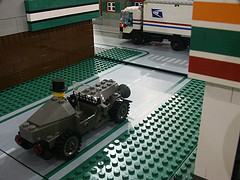 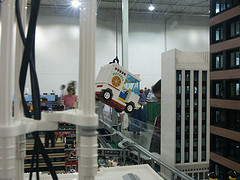 Kevin still has fun with the crane. 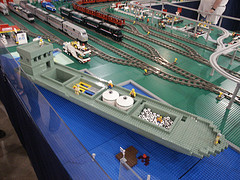 Denise advertises another club because their shirt is blue .

After it was all over, a group picture in our new club shirts.

Minifig abuse! Basketballers made to hit the bridge with their heads! Whap! 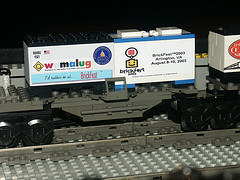 The newest container in our collection.